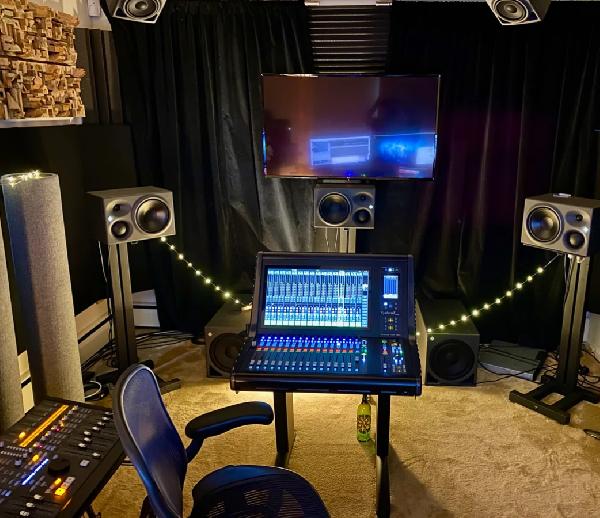 John Harris is a dedicated broadcast and mix engineer in the USA.  For 30 years, he has been the music mixer for the Grammys, the spectacular music industry award show. In addition, he recorded artists such as U2, Metallica, Eric Clapton, Paul McCartney, and many others.

This year, when the whole World has gone remote., Harris has set up a high-end, remote mixing environment with Neumann monitors at his home.

Harris and his creative partner, Jody Elff, have spent recent years discussing and experimenting with the possibility of recording and mixing on drastic distances and the likely consequences of this.

“What would that do for our industry?” Harris asks. “The industry of remote recording has changed 100-fold since I started, and it has become very specialized, it comes down to you and your art, and how you create your best.”

Harris’ art has been mixing live television for more than three decades.

The partners began following their new endeavor HEAR in earnest last year. At the same time, they leveraged existing technologies such as the Internet, proprietary switches, VPNs, and other connectivity components

Their target was delivering perfect recordings and mixes to remote clients.

Harris explains; “The system we have set up basically consists of two components: one is to control the machines on the other side, and one is to hear them properly. Our controllers are so fast that you can really get the feel of a live remote mix so you are making fluid movements.” When the pandemic hit in March, their new business model was put to the test with real-world conditions immediately, wasting no time.

Harris states;  “I have a complete 5.1 system and four height monitors, everything is Neumann active monitors”.

His system consists of three Neumann KH 310 monitors at the front left, center, and right mix positions. There are two KH 310s in the rear and four KH 120 on the ceiling. They are all set up in a rectangular plane and all point to the mixing position.

Harris’ new mix environment sets the bar for what is now possible for remote, multi-channel, broadcast audio. “My goal here is to demonstrate that we are no longer limited by location-based facilities,” says Harris. “I want to get people excited about how we are able to deliver all the needed components to the artist and monitor and create in an ideal environment, and to a Dolby standard.”

To facilitate their remote recordings, Harris and Elff FedEx Pelican cases to the recording locations which can be sent to professional facilities or, more often than not, a personal home. In each case, there is a six-space rack with recording hardware and software, in addition, microphones.

Harris says;  “They roll the case in, power it up, and plug the internet in. When the client turns it on, our switches see it and immediately we are able to control everything, we talk to them on their headphones as if they were in a studio. The systems always function as a “recorder” but also function as a mixer that I control with hardware controls, not a mouse. If the goal is to be live, it will output my mix to streaming, a network, or wherever it’s needed in real-time.”

When the recording is complete, Harris says the audio is uploaded to a secure site. In  20 minutes Harris is able to access an entire multi-track. Then he can start remixing from the point he left.

Despite the pandemic, Harris feels he connects well with his peers. He is quite happy with his Neumann mix array: “I feel more in touch with the audio world than I ever have, and I am getting great results from these monitors. My phone has been ringing off the hook, everyone is talking, being creative, and coming together as a community. There are just not that many events yet, but we are ahead of the curve though and we are ready.”