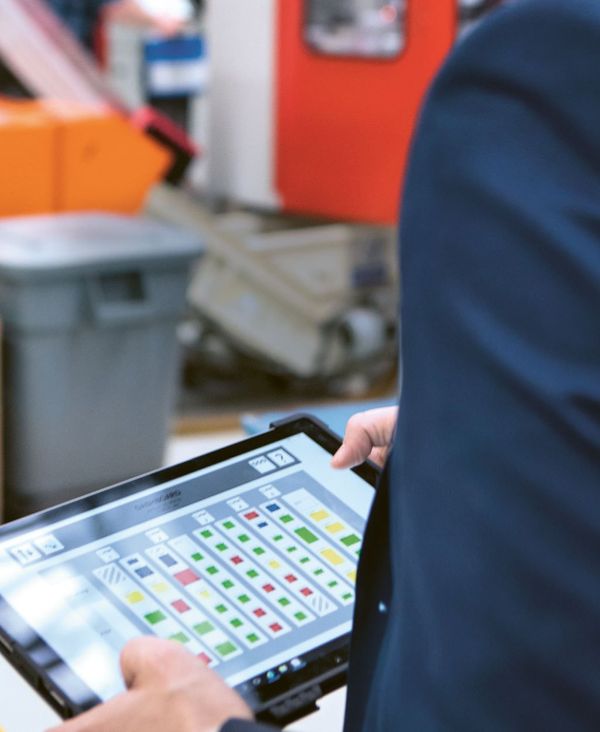 A fairly large group of young passengers were taking the S-Bahn (Germany’s first motorized aircraft) from central Berlin to the southeast portion of the city, a trip that lasted a good half-hour.

At Adlershof, the group assembled emerged from the train and fanned out through the neighborhood and campus after departing the station.

That day, where Germany’s first motorized aircraft were once tested, a number of institutions have sprung up: five techno­logy centers, ten non-university research institutes with 1,700 employees, and the mathematics-natural science campus of Berlin-based Humboldt University.

And not least of all, a manu­facturing facility. Freudenberg Sealing Technologies (FST) has been manufacturing axle boots and sealing bellows for use in automobile chassis here since 2011. The plant employs a staff of about 220, and 100 million parts leave the plant each year.

“Berlin-Adlershof describes itself as Berlin’s smartest neighborhood, and we see a great deal of dynamism and creativity here,” said Dr. Matthias Götzfried, who manages the Freudenberg Sealing Technologies plant. “The combination of startups and established companies, in particular, is exciting. This makes it possible to put innovative ideas into practice quickly.” In the digitalization of manufacturing, for example. The plant’s sealing bellows are destined for tie rod ball joints and transverse and longitudinal control arms.

Produced in large volumes, they are nonetheless specially designed for each customer. So Berlin Adlershof is not purely an FST manufacturing operation. “We have all the functions of a small company here, and even employ our own development engineers,” Götzfried said. Because the geometry of the bellows and the arrangement of the seal lips continually vary, the production process has to meet stringent requirements. For example, manufacturing engineers have to constantly reset the tools and adjust processes. “To digitalize these processes, we introduced a manufacturing execution system in 2014,” Götzfried said as he stepped into the manufacturing area.

The machine park here is divided into two large production areas with seven production lines. Containers for the finished products are positioned between them. When the machines are running, the noises that most of them make are monotone. “Previously, we worked with many manual notes on paper regarding raw materials, production goals, scrap, or particular machine parameters,” Götzfried said. “Today our production is digital. The data are read directly from the machines and are available in real-time.” On one hand, the Manufacturing Execution System (MES) links the machine data with the overarching ERP system, which is used to control the material supply, among other things. On the other hand, it establishes the connection to the machine park in the manufacturing area.

The MES prepares the data on a homepage that employees can call up with a tablet. When a machine displays the color “green,” it is running trouble-free at the target output. “Yellow” indicates that the particular machine is running but not at the target output. If it shows “red,” an unscheduled stoppage has occurred. At this point, the shift leader or the maintenance worker immediately checks the tablet to see which machine is affected, where it is located, precisely how long it has been shut down, and what the cause was.

“Whether a metal part jammed, a target temperature was not reached or the tool was not positioned precisely, the machine must be brought to a halt. This enables employees to quickly correct the error,” Götzfried said. “In each case, it is especially important for us to integrate MES directly into our processes.

For example, stoppages are displayed as pop-up reports that have to be acknowledged by the responsible MES persons.” Because the data are available in real-time, the fitters and maintenance staff can respond more quickly than in the past, directly increasing uptime and output, that is, the number of properly manufactured parts.

Shift leaders and production and plant managers are able to call up key operating data, such as output as a percentage reflecting actual versus target volumes, or more detailed operating figures showing availability, cycle time, scrap, and other values.

The mass of data is also made available to Freudenberg Sealing Technologies process engineers. Based on documented error profiles, they can optimize machinery operation and take action ahead of time to prevent future errors. For its part, the maintenance staff uses the data to adjust the service intervals to meet actual needs, to better integrate the interventions into the production processes.

In any case, if a tool change is due, the work can be handled in a specific timeframe. “Our MES system also provides the data-driven basis for future proactive maintenance,” Götzfried said.

For Götzfried, the greatest challenge in the machine park’s digitalization is that it has mostly been built up over time. “Here you have highly modern machines standing next to older generations that you have to adapt for work with the MES system.” It is also crucial for employees to accept digital tools. The Adlershof plant has taken measures to promote this.

One is a small digital team that does programming on-site alongside the employees. The efforts are paying off. Before the introduction of MES, the plant had 4.6 defective parts per million units produced. Thanks to the optimizations, this figure has improved to just a single defective part in 2018 – and that was out of 10 million units manufactured.

Additional projects are expected to bring the plant further down the road to digitalization. For one thing, FST experts want to use the masses of captured data to enable AI learning systems to automatically adapt key machine parameters such as temperatures and cycle times to particular input parameters – for example, to information on the use of raw materials. Augmented reality methods are also expected to facilitate training on equipment maintenance and repairs with the help of virtual reality glasses.