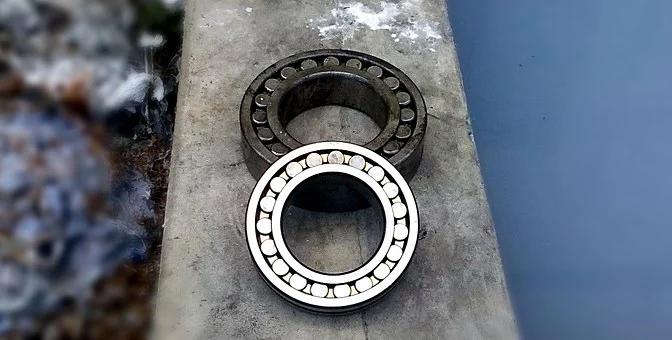 A bearing is a component used in machines that facilitates motion and reduces friction in the moving parts. It is designed to provide free linear movement or rotation around a fixed axis.

The classification of a bearing depends on the type of operation, the required motion, and the applied force.

The most simple classification is a plain bearing, which consists of a shaft rotating in a hole and, the most commonly known bearing is a ball bearing that makes use of balls in between the rings to allow smooth movement at a defined pace.

Likewise, in a roller bearing the elements used are cylindrical, taper, or spherical rollers.

History of a rolling bearing

The invention of a rolling bearing goes back centuries. The first form being wooden rollers supporting an object for movement, better known as the Wheel.

40BC: A wooden ball bearing supporting a rotating table. This was recovered from the wrecks of the Roman Nemi ships in Lake Nemi, Italy.

1500: The design and blueprint drawings of a helicopter by Leonardo da Vinci incorporated ball bearings. This being the first recorded use of bearings in an aerospace design.

1740: First caged-roller bearing was invented by John Harrison for H3 marine timekeeping. Although it had a limited oscillating motion, he also used the same bearing in a contemporary regulatory clock.

Bearings have been an important integral part of the 1st Industrial Revolution, its role being to allow the machinery to operate efficiently.

The first plain and rolling element bearings were made of wood followed by bronze.

Over its history bearings have been made of various materials viz. ceramic, sapphire, glass, steel, etc as well as plastics which are widely used today.

The sapphire plain bearing was mainly used by watchmakers who produced jeweled watches. It allowed reduced friction, this being more precise in timekeeping.

The wooden bearings, although not very commonly seen, are still used in old clocks and watermills.

1974: The first modern recorded patent on ball bearings was awarded to a British inventor and ironmaster, Philip Vaughan. His modern design incorporated a ball running along a groove in an axle assembly

1869: The first patent for radial ball bearing was awarded to a Parisian bicycle mechanic, Jules Suriray. The bearings were fitted out in the winning bicycle used by James Morre at the world’s first bicycle race in Paris-Rouen.

1883: Witnessed the creation of an independent bearing industry by the founder of FAG, Friedrich Fischer.

1898: Witnessed the farsightedness of Henry Timken as an innovator in carriage manufacturing, patented the tapered roller bearing. In the subsequent year, Timken established a company to produce his innovation. Over the next century, the company grew manufacturing bearings of all kinds viz. specialty steel as well as an array of related products & services.

1907: The patent of a modern self-aligning ball bearing was awarded to Sven Wingquist of SKF, design patent No. 25406.

The early 1980s: The first bi-material plain bearing was invented by Robert Schroeder, founder of Pacific Bearing. This bearing had a metal shell, viz. aluminum, steel, stainless steel with a Teflon-base material connected by a thin adhesive layer, and was size interchangeable with linear ball bearings.