A Positive Charge for Energy Storage 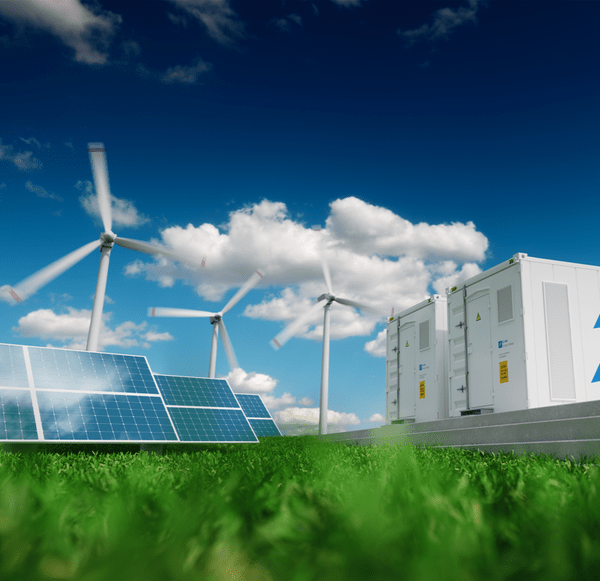 A bird’s-eye view of the drivers behind the energy storage market’s rapid expansion, with a focus on the exciting technological advancements and safety protocols that have enabled its growth and its impact on microgrids and hybrid power systems.

The transition to clean energy is underway and the adoption of microgrids and hybrid power systems gains momentum seemingly every day. This transformation is both inspired by and responsible for significant growth within the energy storage market, in addition to a surge of technological innovation.

Batteries are supportive technologies that can enhance the functionality, value, economics, and resiliency of renewable energy-based systems. They are becoming an integral component of the clean energy transition. Projected growth worldwide is significant, in the next 10 years, energy storage capacity is expected to reach a 33% compound annual growth rate (CAGR) and a cumulative capacity of 741 gigawatt-hours by 2030.

Analysts predict that in the coming years, as countries around the world work to recover from the pandemic, rebuild their economies, and reinforce their infrastructure while moving forward with the transition to clean energy, many will look to energy storage as a technology solution. In fact, close to 10,000 gigawatt-hours of energy storage will be needed worldwide by 2040 for the world to meet climate and sustainable energy goals, explains the IEA’s Sustainable Development Scenario. That’s 50 times the size of the current market.

Experts agree that accelerated innovation will be essential to achieve this growth. In tandem, safety experts are developing the certifications needed to provide guidance on the safe use of batteries.

In the US, utility resource planning is positioned to drive deployments in the coming decade. Utility approaches to renewables and energy storage have shifted in the past two years, as detailed in WoodMackenzie’s latest Energy Storage Monitor report, which indicates a majority of US utilities are embracing renewables and storage due to favorable costs and state-level clean energy policies. As a result, the report shows that the US storage market is set to surge through 2021.

Lithium-based batteries remain the leading energy storage technology for a variety of reasons, according to a recent Research and Markets report Li-ion Battery – Global Market Trajectory and Analytics. They have a clear advantage when weight is important, such as in vehicles and hand-held applications, due to their high energy density. Other desirable attributes include a low rate of self-discharge, low required maintenance, fast-charging capabilities, and longer life and durability.

However, experts agree that lithium-ion is not the only promising technology in the future of energy storage. In fact, many companies are currently focused on developing new, novel battery technologies that may be a better technical fit for stationary applications in the electric power industry where weight is not a critical factor.

Energy Storage Innovation on the Rise

Advances in energy storage technologies are set to catalyze the transition to clean energy around the world. And judging by the patent activity, battery innovation is gaining momentum. Between 2005 and 2018, patent filing in batteries and other electricity storage technologies grew at an average annual rate of 14% worldwide, four times faster than the average of all technology fields. According to the recent report, Innovation in batteries and electricity storage – a global analysis based on patent data, batteries now account for nearly 90% of all patenting activity in the area of electricity storage and that the rise in innovation is primarily driven by advances in rechargeable lithium-ion batteries used in consumer electronic devices and electric cars.

A noticeable trend among emerging battery technologies is a shift away from technologies reliant on rare earth minerals like nickel and cobalt. Cobalt is the least abundant and most expensive component in battery cathodes according to battery experts. Several companies have developed cobalt-free batteries that boast improved energy density, battery life, and safety. Novel energy storage technologies like zinc-air and aluminum-air rely on elements such as oxygen, sodium, and carbon, while other novel approaches capitalize on the properties of graphene, silica sand, and seawater.

Researchers from Harvard University and Stanford University have made significant strides to advance the development of liquid flow batteries. Current literature indicates that there is also a wave of innovation taking place in battery components. From hybrid anodes to nanowires made from gold and vertical carbon nanotube electrodes, these component upgrades aim to boost battery power and improve lifetime cycling.

Safety protocols are advancing in parallel with energy storage technologies. Safety science company, UL, originally developed the UL 9540A Test Method to bring clarity about the fire safety performance of an energy storage system if thermal runaway were to occur.

The company recently launched an online database that identifies manufacturers who have completed testing under the ANSI/CAN/UL 9540A Standard for Test Method for Evaluating Thermal Runaway Fire Propagation in Battery Energy Storage Systems. The database allows manufacturers that have had their cell, module, unit, or installation evaluated for thermal runaway fire propagation by UL to share the data in three ways: the model number with contact information to obtain more test details, the UL 9540A report summary or the full test report.

The database also provides insight on battery safety that end-users can depend on when planning and deploying energy storage projects, allowing energy professionals to verify that a manufacturer’s product addresses the key issues identified by building and fire codes such as BESS installation, ventilation requirements, fire protection, and fire service strategy and tactics.

“The increasing energy density of lithium-ion batteries used in energy storage systems make them both attractive and dangerous. Thankfully serious failures are rare, but when they do occur the results can be terrible,” said James Trudeau, global business development manager for Integrated Energy Systems at UL.

Trudeau points to significant fires that occurred recently: South Korea suffered over 28 large-scale energy storage fires in the past two years and Arizona Public Service (APS) had an energy storage fire and explosion in 2019 that sent four firefighters to the hospital.

“These incidents occurred in systems that were not built to the new and demanding UL safety standards (UL 9540 & UL 9540A) that governments around the world are now requiring,” he said. “When built, and completely tested to these standards, energy storage systems can be a safe and reliable anchor to microgrid systems. The new database of tested systems can help system designers select energy storage systems that have gone through this rigorous testing.”

As solar + storage has become less expensive, designing and optimizing distributed energy resources has become more complex. That complexity only increases as the use of demand-based tariffs by utilities is on the rise, and energy-intensive EV charging becomes increasingly prominent.

“The history and structure of the electric utility industry has been driven to a very large extent by the fact that, until recently, electricity could not be economically stored. Now that electric storage is becoming economically viable, it will have enormous implications for the industry,” said HOMER Energy founder and global microgrid lead at UL, Dr. Peter Lilienthal.

“The most obvious impact will be facilitating much larger penetrations of solar and wind power,” he said. HOMER software is able to accurately model battery life and performance and its impact on the economic value of the hybrid system over the lifetime of a project.

As hybrid renewable systems that include energy storage become more prominent in the power supply mix, Lilienthal says it increases the need for new analytical and planning methodologies.

“We are excited about the fast-changing energy landscape and proud to be in the vanguard of these changes,” he said.