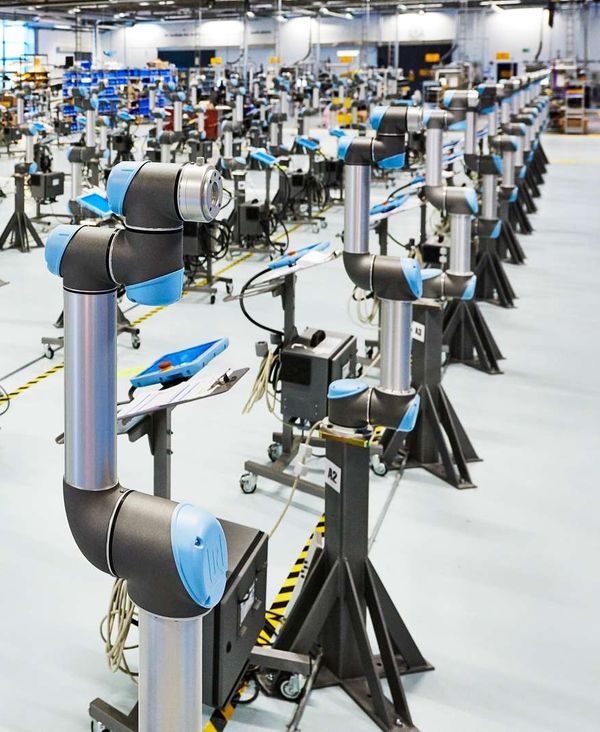 Collaborative robots (cobots), which are used in all areas of the industry, are used as a hygienic and fast solution in the production of mobile disinfection, swab test (PCR), and medical components in health, research, laboratory areas in the Covid 19 pandemic, whose effects continue all over the world.

These collaborative robots, which are easy to program and can be used even on a table and offer a hygienic environment for scientific research and laboratories, perform a few tasks such as taking a swab from the nose during the procedure and carrying the swab to the laboratory. The developed cobot can get a cotton swab with the help of one of its two-finger holders. Using a smart camera attachment, the cobot then identifies the subject’s nostril and carefully inserts the cotton swab into the patient’s nasal cavity using a force sensor. The cobot slowly turns the rod, waits ten seconds, slowly pulls the rod out, and places it in a tube to transport it to a test facility. The system is currently undergoing regulation in the United States and Taiwan.

Medical equipment manufacturers are now working harder to stockpile their supplies due to the Covid-19 pandemic and increasing global demand. Netherlands-based RM Precision Machine Co. decided to continue the production of the company 24/7, following the increase in demand for respiratory components. The company has installed a UR10 cobot to keep operations on the CNC machine 24 hours a day without interruption. The transition to robotic automation has been successful. The turnaround time from order to production has decreased from an average of two months to just 2 weeks.

In April 2020, Alabama-based HomTex switched to robotic automation in the production of high-performance, disposable face masks to help the world fight Covid-19. Following the successful project, HomTex announced that it has made an investment of 5 million dollars to add 15 lines with a production capacity of 350 million masks per year. Using the Universal Robots UR5e for end-of-line carton packaging, the collaborative robot, and the UR10e robot for palletizing tasks, the company plans to produce 350 million masks annually.

Drim Robotics, a UR Certified System Integrator based in Czechowice-Dziedzice, Poland, has developed a mobile disinfection platform that combines an UR5 cobot mounted on the MiR100 platform. The robotic system was designed to spray disinfectant and is managed remotely with cloud software, enabling healthcare professionals to sterilize large areas without risking their lives.

Many companies from the agriculture sector in India have suffered great blows due to the Covid-19 pandemic. In particular, the demand for irrigation equipment, which is critical in agriculture in the country, has increased. Krishi Group, one of India’s leading agricultural producers, faced with a 40 to 50 percent reduction in workforce, has found it difficult to meet customer demands until they integrate a UR Collaborative robot into its plant. stated.

Robot solution based on variable (increasing or decreasing) production capacity

All Axis Machining, a 20-person machine shop, and manufacturer based in Dallas, Texas, had to reduce its production capacity due to social distancing requirements. Faced with the possibility of reversing future orders, the company increased its production by deploying eight UR10 collaborative robots for basic machine maintenance tasks, despite the workforce uncertainty caused by the covid 19t outbreak. “This is the best thing we have ever done, I wasted no time due to the epidemic,” says Gary Kuzmin, owner of All Axis Machining.

The wave of ur cobot is worth seeing in football …

While the Danish Superliga football team Hobro IK adhered to the club’s social distance regulations, it needed a solution to bring some color to the touchline and boost morale. They eventually turned to Universal Robots distributor Technion for support. The UR cobot, who waved several flags, showed Hobro their support and raised the atmosphere.