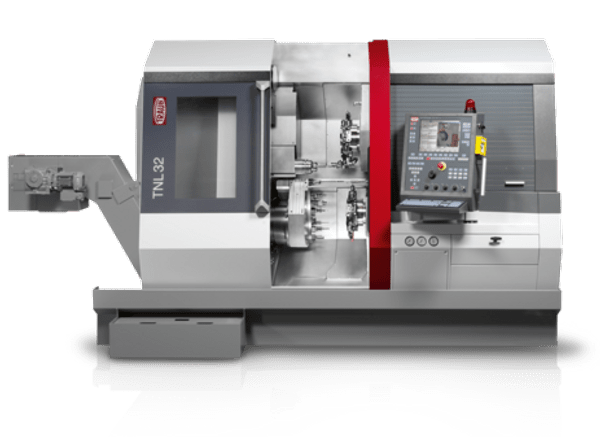 The TRAUB TNL32-11 is the latest addition to the successful TRAUB TNL32 sliding/fixed headstock automatic lathe series. Its signature feature is a front working attachment mounted on a cross-slide which raises the number of linear axes on the machine to eleven. This means that the powerful TRAUB TNL32-11 can perform simultaneous machining with three fully independent tools. This saves machining time – especially for components with a high proportion of drilling.

The TRAUB TNL32 series has rapidly become a success on the market. Three different models – the TNL32-7B, the TNL32-9 and the TNL32-9P cover diverse market needs. All of them have explanatory product names: the 32 refers to the bar capacity, the numbers 7 and 9 indicate the number of linear axes, the B stands for an additional B-axis and the P for a machine with the TX8i-p control. So it is obvious that the fourth member of this lathe family, the TNL32-11, has two additional linear axes.

Like the TNL32-9, the TNL32-11 has a headstock moving in the Z-axis, an upper and identical lower turret with X, Y, and Z-axes, and a counter spindle movable in the X and Z directions. A new feature is the front working attachment, which sits on an additional cross-slide moving in the X and Z-axes. It provides the user with further, freely positionable tools and enables the use of up to three tools, simultaneously and independently of each other.

In addition to the two linear X and Z axes, the front working attachment features a CNC circular axis. By the interpolation of the rotary axis with the X-axis and the C-axis of the main spindle, the front working attachment can also be used in the Y direction using an interpolated Y-axis. The particular benefit: when a drilling tool needs to be corrected to exact center, the necessary corrections can be simply performed via the CNC controller. That can be help with small parts which react with great sensitivity to even minimal offset errors.

The large clearance circle of the tool mountings of the front working attachment was chosen deliberately: its generous size allows simultaneous and collision-free machining together with the two tool turrets on the main spindle.

The front working attachment makes eight additional tool stations available. Four of them are used to mount fixed tools, the other four are for live tools.

With an output of up to 3.4 kW and a maximum speed of 12,000 revolutions, the tool drive in the front working attachment is extremely productive and designed for high power. The tool holders are highly robust and stiff with a mounting shank diameter of 36 mm. Individually controllable coolant pressure of up to 80 bar is available at every station. One live station can be used as a deep-hole drilling station with a coolant supply up to 120 bar. The front working attachment can also be used as a tailstock when producing long components.

Alongside the advantages of the front working attachment, the TRAUB TNL32-11 sliding/fixed headstock automatic lathe offers the many other benefits of the entire series. The work area is easily accessible to the operator due to its high and wide sliding door, simplifying setup and changeovers. A large inspection window allows the operator to keep a close eye on the machining process. The long Z travel of the headstock means the machine can easily be used for sliding or fixed headstock turning without compromises. The conversion effort is less than 15 minutes.

Two drives in one turret

The tool turret technology is particularly impressive. Indexing is performed using an NC rotary axis that controls movement via an internally meshing planetary gear. This allows the turret to be indexed to any preferred position without a mechanical locking mechanism being necessary. The free positioning of the turret makes multiple-tool assignment possible on each station.

Another highlight is the “Dual Drive”, consisting of two drive trains integrated within one turret. This patented drive solution reduces non-machining time and thus also machining times per piece. An idea with is both simple and ingenious: while one tool is in use, the tool intended for the next work step can be accelerated up to the desired speed during main time and is immediately available at full speed after the turret indexing operation. Jerky accelerations and delays that were previously unavoidable when reducing auxiliary processing times are now a thing of the past. In addition, the user benefits specifically from the fact that tool holder wear is reduced due to the lower acceleration values. Even with live tools, chip-to-chip times are around just 0.3 seconds.

The TRAUB compact shank system is used in the turrets, enabling extremely precise mounting of tool holders. They are seated deeper in the turret than in other commercial systems, which results in less leverage effect and thus greater stiffness. For live tool holders, the large 45 mm shank diameter allows for the installation of spindle bearings with large diameters. A quick-change system enables high-precision, smooth exchange of tools without removing the tool holder. The compact shank system verifiably increases the tool life and also contributes to improved surface quality.

The machines in the TNL-32 series are extremely compact, aided by the control cabinet integrated in the upper area of the machine. Another plus: For servicing, only a few manipulations are needed to remove the back cover to allow full access to the mechanical assemblies. The hydraulic and pneumatic components are also arranged with full accessibility to the rear of the machine and can be easily checked at a glance.

The TNL32 series is equipped with the TRAUB TX8i-s control and the TX8i-p for the TNL32-9P. Both models are based on CNC hardware from Mitsubishi, while the controllers’ user interface software – like all models developed in the last 30 years – is a one hundred percent TRAUB development.

The advantage is obvious: Customers need not rely on standardized software products; rather customer and application needs can be implemented and integrated optimally into the development. Of course, both controllers are compatible with all previous TRAUB controllers so that existing programs can be used.

Numerous details are testament to the quality of TRAUB controllers, including: