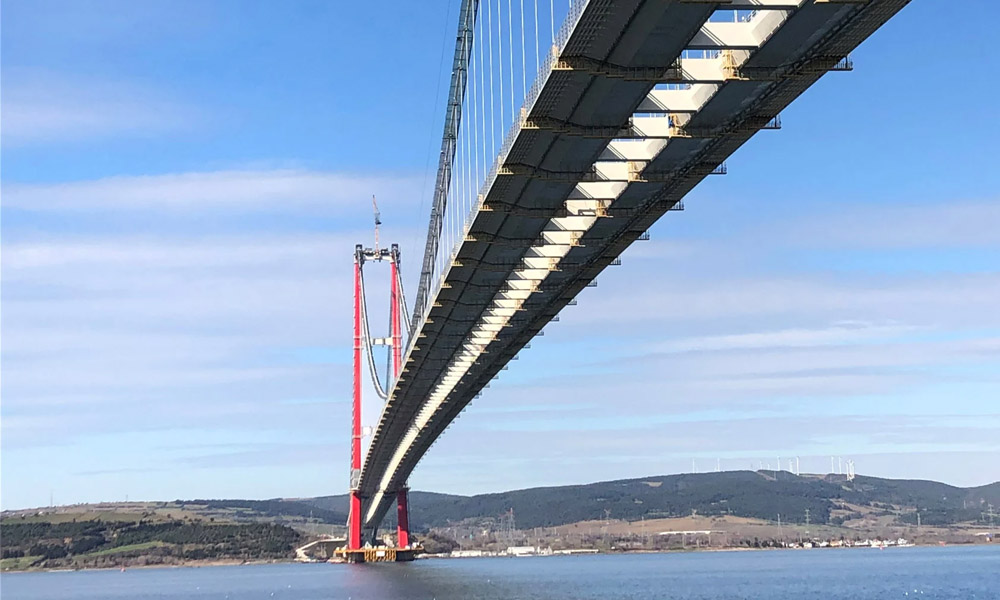 Teledyne FLIR recently installed its dual thermal AID camera technology for use on the new 1915 Çanakkale Bridge in Turkey, which was constructed in a joint venture between DL E&C (formerly Daelim), Limak, SK Ecoplant and Yapı Merkezi. With incident detection cameras covering the entire length of the 4.6 km bridge, Teledyne FLIR technology will allow traffic users to cross the Çanakkale Strait in a fast and safe way.

At 4608-meters in length, 1915 Çanakkale Bridge is the longest mid-span suspension bridge in the world to date. The deck carries six lanes of motorway (three in each direction), together with two walkways on each side for maintenance purposes. Part of the Malkara-Çanakkale Motorway, the bridge is expected to be a huge contribution to the region and country’s economy by decreasing the time it takes to cross the Çanakkale Strait to six minutes.

From the onset, the consortium of DL E&C, Limak, SK Ecoplant, and Yapı Merkezi was looking for a highperformance automatic incident detection (AID) system that was able to deliver reliable detection results in all weather conditions. Operators needed to be able to see clearly in various environmental conditions as well, including foggy weather and heavy rain. Another difficulty was the risk of sun glare which could distort the images generated by a visual camera based automatic incident detection system. Thermal cameras have no issues whatsoever with fog, bad weather, or sun glare since they can detect traffic based on heat and not light. “Winters can be hard in Çanakkale and Malkara, with snow, fog and heavy wind,” says Emrah Ilteray, Chairman of the Board at Elmak-YMIdis, the joint venture responsible for ITS part of the project.

Thermal and Visible-Light Camera in One

Teledyne FLIR provided 98 units of the ITS-632 Dual AID camera to be installed along the entire bridge length every 96 meters on each side. This camera combines best-in class thermal and visual imaging technology with advanced video analytics to provide a complete solution for automatic incident detection. The camera can reliably detect incidents—including collisions, stopped vehicles, wrong-way drivers and pedestrians—in challenging lighting and weather conditions. In addition, the camera also detects fires within seconds of ignition and provides valuable traffic data, including number of vehicles and vehicle classes.

The visible-light camera offers bridge operators a way to verify incidents in real time in a visual way. The visual footage can also be used as forensic evidence after an incident. In addition to the incident detection cameras, Teledyne FLIR also delivered 8 of its FLIR Elara DX-Series multispectral pan/tilt/zoom (PTZ) security cameras, which offer control room operators extra means to monitor the bridge for incidents.

“The 1915 Çanakkale Bridge is a high-profile project with international impact,” says Ilteray. “That’s we did not want to compromise on the quality of our incident detection technology. FLIR’s Dual AID camera ticks all the boxes in terms of detection performance and accuracy, and the support from the company to realize this project has been nothing but amazing.”

Aid On the Edge

One of the strengths of Teledyne FLIR’s dual series AID cameras, which knocked most of the company’s competitors out of the park, is that they have their video analytics embedded within the camera. Since the camera takes care of all the video analytics processing, the video stream does not need to be sent over the network to a central processing server. This significantly reduces network traffic and results in much lower latency. And in case the network should go down, the camera can still store its incident events. Another benefit of such a distributed architecture is that in the rare case that an AID camera should go down, the rest of the network and camera infrastructure are not affected.

Managing Sources in the Control Room

Information coming from the 98 AID cameras and 8 security cameras is collected and managed by FLIR’s Flux video detection management system. Control room operators use this software to overview traffic data, events, alarms and video images generated by the various cameras. Flux provides a user-friendly interface composed of a monitoring and a reporting application and enables real-time monitoring of events and alarms.

Fire distinguishing robots to the center of forest fires: TAF60 and TAF60X